You are here: Vietnam Trail Series » Q and A – Ambassador Giles Lever

Q and A – Ambassador Giles Lever

Giles Lever is the British Ambassador to Vietnam, a passionate ultra runner and multiple finisher of VMM and VJM. Soon he will be leaving Vietnam for a new post, so we took the chance to catch up with him about his ultra experience, managing running alongside a busy job, and the chance he’ll be back in Vietnam to pin a number on in the near future… 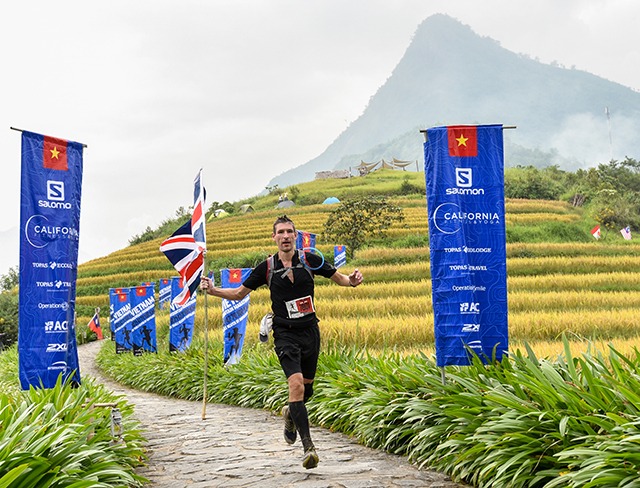 What is your sporting background?

I wasn’t a sporty kid at school.  I wasn’t on any of the school teams.  But my father loved hill-walking so I got used to climbing mountains from a young age. And from university onwards, I played football – as a goalkeeper – for 15 years.

What got you started in long distance running?

I had run a half-marathon as a one-off at university.  But then I forgot about running for a long time. Eventually, when I was in my mid-30s and living in Japan, I found I was getting fat. So I started gym training and running 5-10km at lunchtime, to lose weight and stay fit for football.  Then some friends who were runners persuaded me to run a marathon. And that was it. I moved back to the UK, couldn’t find a new football team, and running took over.

What is a typical week of training in the month before you taper? And what is the longest run you would do before a 70k race?

Usually my high-volume training would be 80-90k a week, and my longest run would be about 37km (on trails in Soc Son).  I did 50km, to celebrate my 50th birthday, 3 weeks before VJM 2018. But that didn’t seem to help much! Some people do more, but I don’t think my body could take it.

Being an ambassador with a busy schedule, how do you arrange your time for ultra running? Do you have any tips for busy people who want to train for an ultra?

As an ambassador in Vietnam, there is a lot of work, but there are not many crisis situations, so I can control and plan my own time quite well. I think if you want to do something enough, you can always find the time for it. To make time for running here, I had to learn how to go to bed early and get up early. I don’t like that, but I do it because I know I will feel happier after I’ve run.

Your results at three VMMs (VMM2015 to VMM2017) and the first edition of VJM were impressive, especially in your age group. Can you share your race strategy for these events?

To be honest, my only race strategy was “see how it goes”. VMM 2015 was my first 42km in the mountains, and VMM 2016 was my first time over 42km, so I had no idea what to expect. In VMM 2016 I tried to hit the checkpoint at 30km in 4 hours and then take it from there. Nutrition is simple. I drink water with rehydration tablets in it, eat Gu gels on the trail, and eat fruit at the aid stations. I think that is enough for a 70km.

One thing I did learn at VMM 2015 was that trail running requires much stronger quad muscles than road running. I did a lot of work on my quads in the gym before VMM 2016 and that helped.

We’ve seen you with headphones on when you run – what music are you listening to? Do you have a top 5 running tunes?

I have a few quiet songs that I find calming, but mostly it is rock and heavy metal to give me energy.  I like Motorhead, The White Stripes, AC/DC. I always sing along to “The Bends” by Radiohead when it comes on, even if I’m going up a hill at the time. “Na na na” by My Chemical Romance always makes me speed up by about 10 seconds/km.

We know you like a beer at the end of a run – if you could have any beer post-run, which would it be? Or maybe just any that is cold?

It isn’t the beer itself, more the pleasure of a post-run beer with my friends.  If I can have a beer after a run with Nguyen Quang Phi, Sara Manurung, Kari Wollebaek, Richard Leech, Berni Widemann, Rosa Carbajal and Alicia Smith, I’m happy.  I don’t care what brand it is. But yeah, it’s got to be cold.

During your ambassador period in Vietnam, you have joined many races around the country. What do you think about the development of the running community and events in Vietnam?

It’s been so fast, and it’s great to see.  When I arrived in 2014, the only races in northern Vietnam were the VMM in September and the Song Hong road races in December, and the participants were nearly all foreigners.  Now I see new events everywhere, more and more Vietnamese people taking part, clubs like LDR organising their own events. Now Vietnam has ultra-runners like Tran Duy Quang and Cao Ngoc Ha who can not just win the big domestic events but compete internationally.  And I think it’s fantastic.

We know that like us at VMM, you support Newborns Vietnam. Can you tell us a little about why you support this cause?

Because it’s a tremendous example of UK-Vietnam partnership and friendship. Newborns Vietnam has done so much to improve the life-chances of babies in Vietnam who are born early, or with serious illnesses. British doctors and nurses give up their time to train Vietnamese counterparts.And the British and international community take on incredible challenges to raise money, like the Cycle A Difference event, or David Lloyd’s Everesting or Isla Challenge.

Some Vietnamese staff from the UK embassy were at VJM – were they trail runners already or did you help to inspire them to join trail races? If so, how?

For most, that was their first trail race, and I was so happy to see them finish it.  I don’t know if I inspired them or not! I think if anyone inspired them it was Graham Knight, with his VMM wins.  I am not even the fastest runner in the British Embassy…

VJM 2018 was your last race in Vietnam. You said it was your “worst-ever day as a runner” – do you still feel that way and what are your thoughts on the race now in reflection?

VJM 2018 was extremely disappointing because I had trained so hard – 361km in March, with lots of hills and long runs.  And I had a good taper. So I was confident of a fast time and a Top 10 place. And I really wanted so much to run a good last race in Vietnam.  But on the day, my body started complaining early, and then after the sun came out, I fell apart. I nearly quit many times, but I’m a stubborn person, so I carried on and finished anyway, in 17 hours.

So yes, it was my slowest, most painful, and most disappointing race.  But I was encouraged by all the messages of support I got afterwards from friends and other runners. And really, it doesn’t matter so much. Much more important things are happening in the world every day. And I would still recommend the race to anyone, without hesitation. It is tough, but it is spectacularly beautiful and very well organised.

Do you think you will come back to Vietnam for a race in the future? Hanoi International Marathon or Vietnam Trail Marathon in Moc Chau perhaps?

Absolutely. Where I am going after Vietnam, there is no trail running, and it will be very hard to train for distance races. But I will still come back, even as a slower runner.  I owe myself one good race at VJM. And the first Hanoi International Marathon will be a historic event for the running community in Hanoi. I will do everything possible to come back for that.