Former national judo champion of Australia, the champion of Vietnam Mountain Marathon 100km came to ultra trail racing in 2017 following her earlier completion of the 96km The Kokoda Track. Here she talks about her love of the outdoors, her sporting past, training, racing and more. 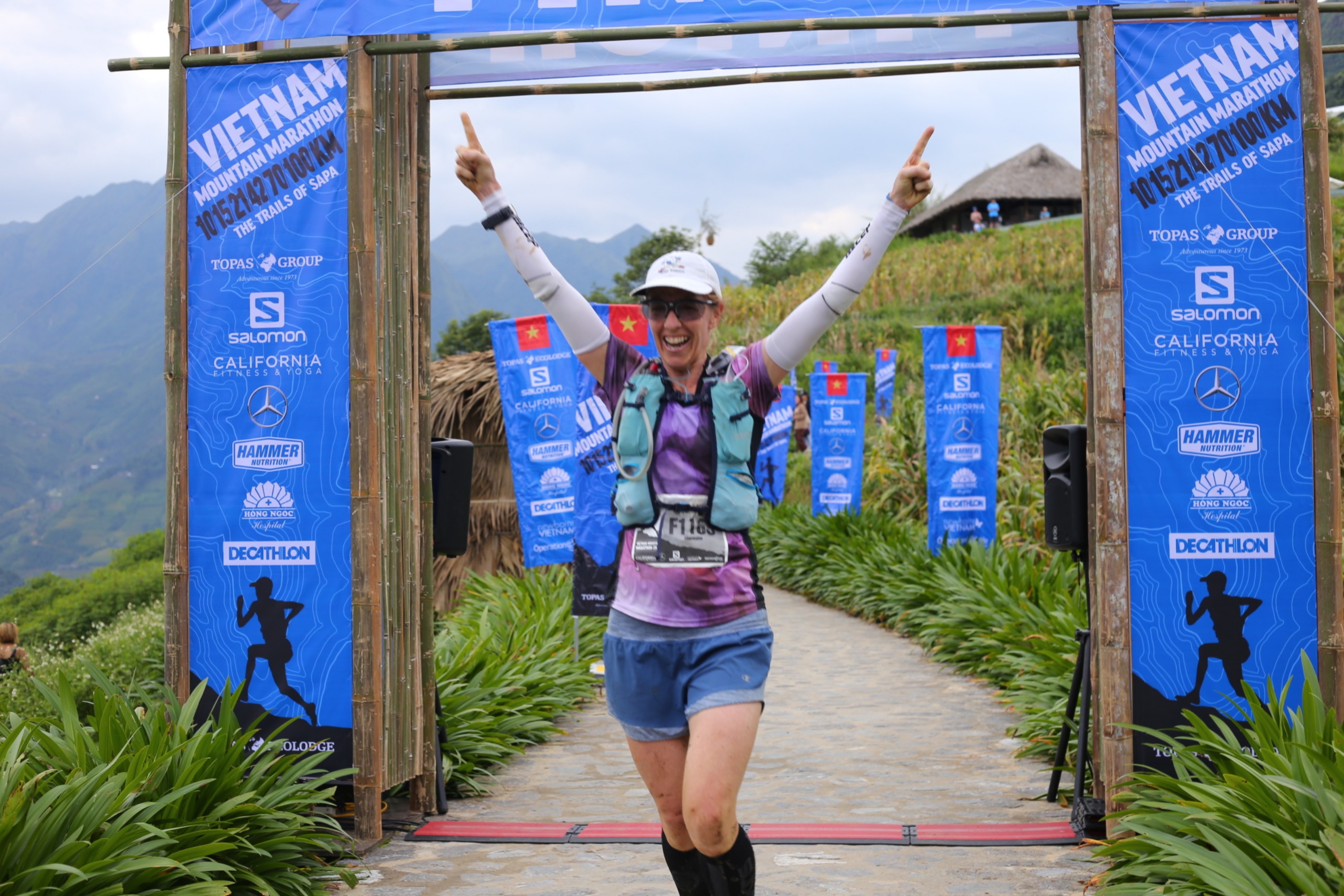 Can you share about your sport background? What led you to running and when did you start?
I grew up in a family of 4 girls with a father and mother who valued sport and encouraged us to participate in a variety of sports. From 10 years old I fell in love with judo and at 21 I was the National Australian champion in my weight division. I spent my youth running cross-country and was successful at a state level. I didn’t run my first marathon until 2011 at the age of 38. I am attracted to longer distances that challenge the mind as well as the body. I ran my first 50km trail run in 2017 and the following year I ran the 100km event and to my surprise came second female in a time of 12:10:09. I was hooked.

You were champ of the Vietnam Mountain Marathon 100k. We know you did not use any poles at the beginning, but then you started to use bamboo poles – can you tell us a bit more about this?
When I was running through the villages that are located near Fansipan mountain a very friendly lady who was running in the 70km event expressed her concern for my lack of poles. She warned me of the climb that we would be heading into and was insistent that I find some bamboo poles. Despite her being in 2nd place at the time she offered one of her poles and instructed me on how to use them as I had never ran with poles before. I had had no need for them on the trails in Australia and my decision to not borrow some from a friend was carelessly made. The kind runner located many options and eventually we found a suitable pole. I wished her well and returned her pole as she continued on her own race. I eventually found a second make shift bamboo pole and was eternally grateful for her stern recommendations. The poles were a most valuable asset to help support my injured leg on the down climbs and essential in enabling me to finish the race.

What did you think of the Vietnam Mountain Marathon 100k course?
The course is what attracted me first to the event and it lived up to everything and more to what I expected it to be. I loved the variety of the course and was looking forward to the challenges of the river crossings and climbing into the mountains. I was so impressed with how well the course was marked and I remembered the race brief about not going far if you haven’t seen a marker. During the night, this happened to me and after a quick back track I realised I had missed a turn up the side of a hill. The added element of the rain increased the technicality of the course. I have never run on such a technical trail before with the additional high assent that never seemed to end. Every corner I turned there was yet another turn up a slippery slope or through a village which introduced me to the magnificent countryside of Sapa. 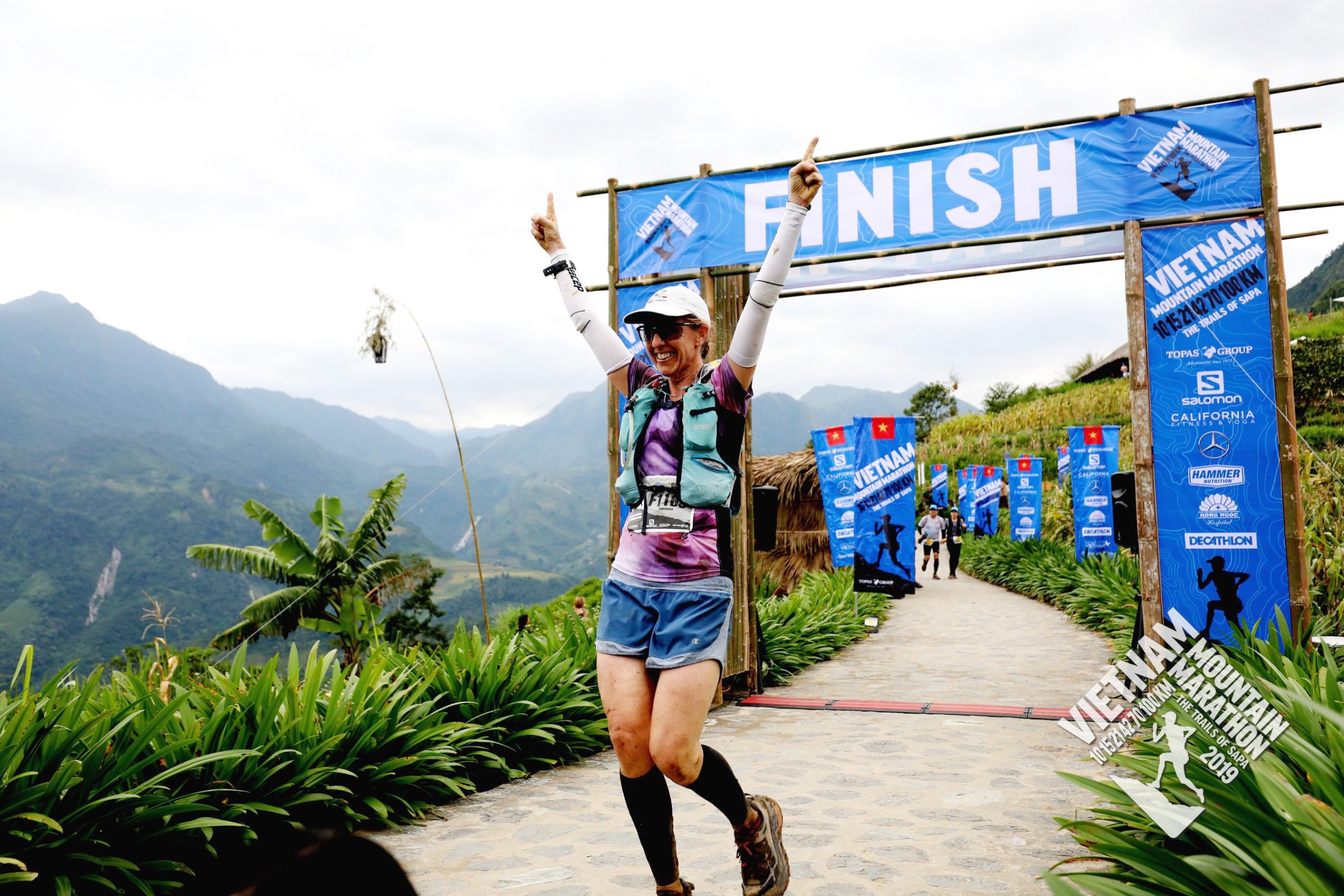 Do you remember your favourite part?
Oh my goodness, the entire course is a collection of favourite parts. Going across the sway bridges, running through the rice terraces, passing villages and waving to the families along the way. I was thrilled about crossing the fast rivers along the Nam Cang River and grateful for the support of the course marshals. There was a time when some fellow runners and I had to shoo the buffalos off the pathway so we could continue. Climbing to the highest point of the course at 2,300m was most challenging but the relief of getting to the top and resting amongst the clouds was surreal. Ultimately, I won’t forget the people. Runners, volunteers, marshals and the local people of Sapa were encouraging and many a friend was made on the trails.

At CP3 you said you fell two times on the course and could not bend your knee. How did you overcome it?
The falls were most unfortunate and resulted in quite a deal of pain. After 30kms the leg began to tighten up and as I continued I realised I was losing movement in my knee. This made the stepping up and down the worn out clay trails extremely difficult. However, I was so pumped about running in Vietnam and had trained so hard to get there that there was no question of me retiring. I hadn’t entered the race expecting to be in contention of winning, but once David had informed me I was in the lead I was not going to back down easily. I knew I had family and friends following me with the GPS tracker and I could feel their energy to push me along and maintain my lead. As the end drew nearer I became more determined to not give up. Once I returned home scans revealed I had extensive tears in three places in my quad muscle.

On a related note, what do you think of the role of running equipment to a runner’s result?
Being equipped for running can make the day go so much smoother. It is vital to be aware of the conditions you will be running in to match suitable equipment. I thought I had run on trails before but had never experienced the technical type of the Mountains of Sapa. I had ensured my shoes were suitable trail shoes and packed a well-equipped race pack. Needless to say, after the Winners Ceremony I purchased some Salomon poles at one of the expo stalls. Experience has prepared me for next time and maybe with the poles I might not have slipped.

When training for an ultra race, what is a typical week of training for you?
Sunday – long runs building up to 52kms.
Monday – 10km recovery run
Tuesday – speed session with repeated sets of 100m to 800metre sets.
Wednesday – Mid week long run between 14klms -22klm
Thursday – 5km run with my Gladstone Road Runners Group. Usually a fast road run.
Friday – rest day
Saturday – 10klms to 14klms.
I also support my running with Yoga – 3 times a week or more if time judo coaching and strength training such as squats, sit ups and lunges.

Do you have a favourite intervals / structured style training session?
I don’t enjoy speed work as I find running fast for short periods of time hard but I know it is beneficial for my training. To overcome this, I complete my speed sessions with a group of friends. I just enjoy a good long run with friends. I love to make sure there are always hills in the trail runs. I’m not fast up them but I love the challenge of a mountain climb.

Who is your biggest influence and/or inspiration?
There are many inspiring runners who are incredible trail runners. I have read many books by Dean Karnazes who writes about his amazing endurance and epic running achievements. He is honest about his difficulties and pain that he suffers during running for days and I often wonder how far I can push my own body. However, the people that influence me the most are the ones who are friends. Judy, who I lived with during my University years has probably been the most influential person for me. When I lived with her she was a single mum and at the peak of marathon training. I was amazed at the running pram she had and how she would continue her training as a mum pushing her son around. She is one of the strongest ladies I know and as soon as I began my own family I purchased my own running pram and pushed
all three of my children around the streets of Gladstone.

We know you have a background in road running and are managing a road runner group – what brought you to trail running at the beginning?
Trail running was introduced to me while I was at University and the lure of experiencing the natural beauty that rainforests and the Australian bush can bring you is where I feel most at home. Not only is it more gentle on the body it is much more attractive than running through the streets. In 2013, I embarked on a goal to walk the Kokoda Trail. The Kokoda Track or Trail is a single-file foot thoroughfare that runs 96 kilometres (60 mi) overland through the Owen Stanley Range in Papua New Guinea. The track was the location of the 1942 World War II battle between Japanese and Allied – primarily Australian – forces in what was then the Australian territory of Papua. I completed this pilgrimage with my good friend who began my love of trail running during University and her husband and son. The main appeal of trail running is where it takes you – I love the fact that it can be a unique experience that not everybody does. And I don’t mind getting dirty and muddy along the way.

Lastly, you said to our RD David, “I hate you” on the finish line…. do you still feel that
way?
David is an amazing race director and organiser and I loved seeing him at the checkpoints throughout the race. It was good to have someone to banter with and David understood my Aussie humour. He was so encouraging. I thoroughly loved the event and the next day I was already planning a return trip. I am proud to have finished first female and 13th runner overall but I would like some redemption on the time that I completed it in. So tell David I will be back one day and to continue creating epic adventures through the mountains. 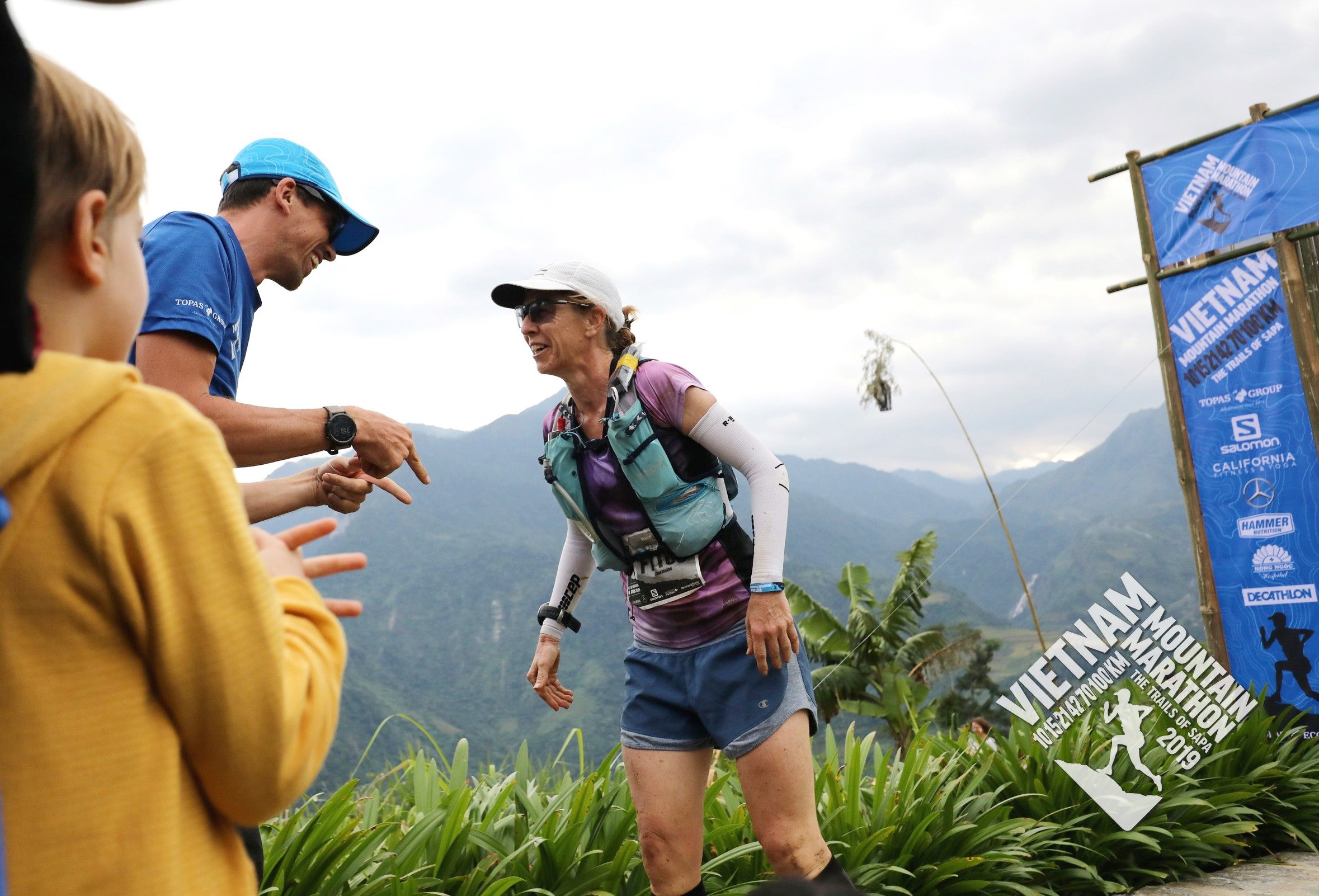 I will expect nothing less from him and when I finish at Topas Ecolodge again I hope to see him at the finish line to shout me another beer!