You are here: Vietnam Trail Series » Tuning up for VMM
Newsletter

Tuning up for VMM

This month we feature 3 epic group running challenges from across Vietnam in preparation for VMM 2018.

Each month we select a run (not a race) from within the VMM and VJM Strava Club which is epic in terms of distance, elevation or both.

This month we feature 3 epic group running challenges from across Vietnam in preparation for VMM 2018.

In the South, Phu Tho Rua Runners from HCMC completed their amazing 24/7 Relay Run Challenge. Starting on July 13 at midnight the runners relayed continuously 24 hours a day, for 10 consecutive days. The aim at first was to achieve 2,000km but at the end of the challenge, they broke the goal and completed 2,300km!

They did this challenge for charity while training for Vietnam Mountain Marathon. They used a one Garmin Fenix 3 to record the entire event, sometimes charging while running.

In the North around 30 runners in Hanoi organised a running challenge for 16 hours started from 6pm on Saturday and finishing at 10am on Sunday. The result was impressive with Tran Toan completed his challenge of 100km in 14 hours while his teammate Nguyen Manh Ha also did 100km.

Meanwhile, in Central Vietnam  a night challenge was organized by Danang Runners on Son Tra. 48 runners including some from Hanoi and HCMC joined the challenge. Five of the female runners completed two laps around Son Tra in the harsh wet conditions. 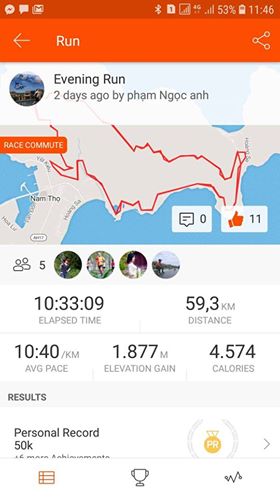