Among the thousands of VTM runners this year there was a very special group of younger runners: 17 kids from the Blue Dragon Children’s Foundation. They all finished strong, and two placed first and second in the 5km. This is their story. (note some names have been changed) 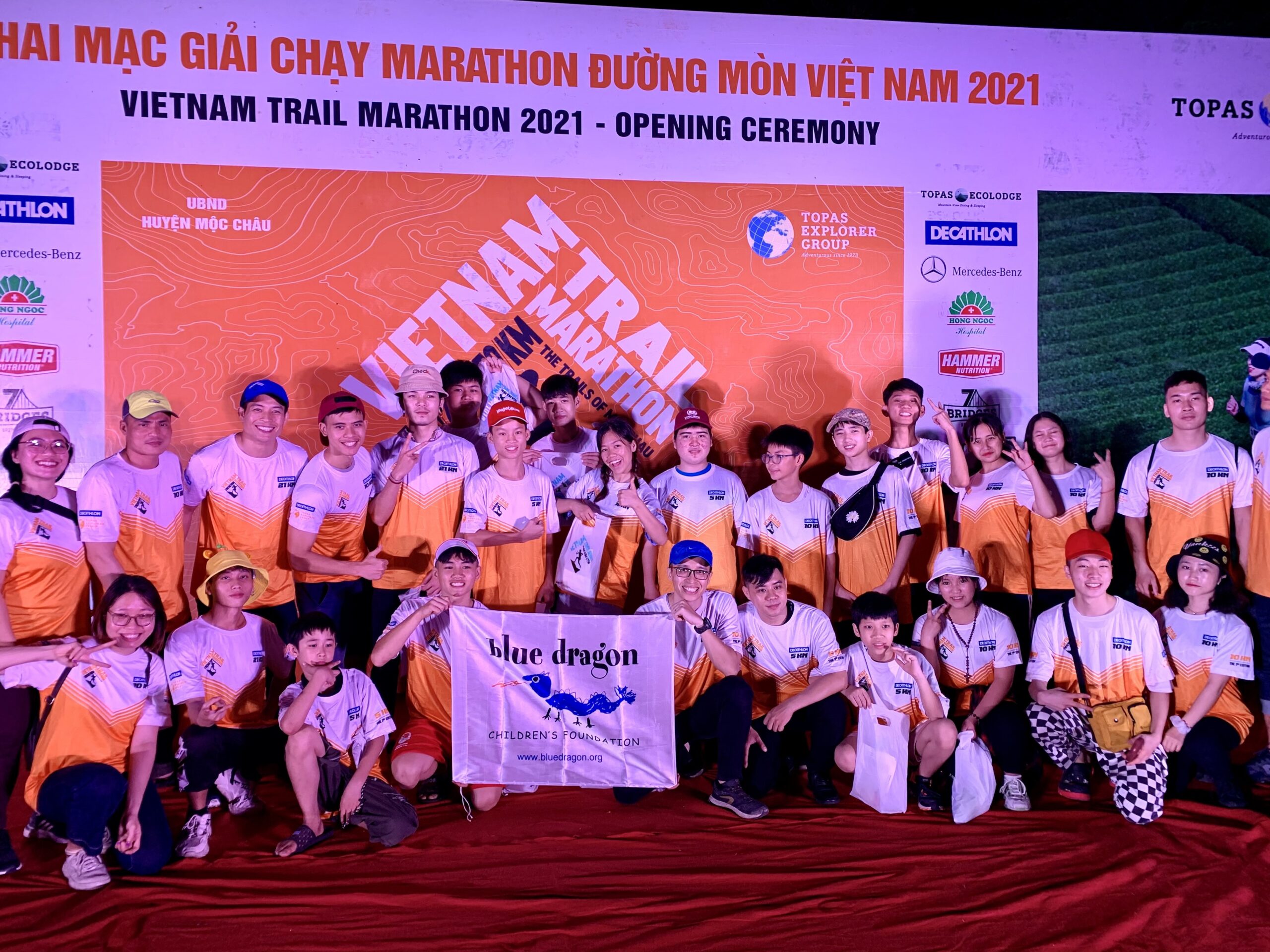 Since mid 2020 when Topas charity partner Blue Dragon Chirldren’s Foundation received slots for Vietnam Mountain Marathon, the Blue Running Club has been holding weekly training sessions  under the direction of Vi, the charity’s Step Ahead Leader and the run club founder, together with their coach, one of the Vietnam Trail Series elite runners, Quang Nguyen and sometimes David Lloyd, Director at Topas.

Some of the kids therefore have months of training under their belts as well as some experience gained at their first foray into mountain running at VMM back in November 2020.

However, for many of them, VTM was their first trail run. This was the case for the winner of the 5km, Kiên, who said:  “I felt very happy. I would like to send my big thanks to anh Quang for training with me. I want to race a longer distance next time and I am confident about that,”

It was also Nghĩa’s first race and he scored second place in the 5km. “I am very happy and proud to join the race,” he said.

Rather than keep his wooden buffalo trophy, he decided to present it to Blue Dragon, saying he did it “so other kids can find the motivation to train and race better”.

The running club is not only the chance for the kids to learn about running but also to connect with their friends and discover their passion for sports.

Diệu, another member of the club, said: “I am very happy to run with the group, it feels like a family.”

Though the course was challenging, the kids felt proud of themselves and they are now dedicated to achieving more at the next races.

Thơ, one of the BD kids who joined both VMM and VTM saw her improvement through the two races.

She said: “I can run longer now and I got to the finish 2 hours earlier”. I would like to thank all the seniors who helped us. They gave us the advice to improve our performances. Every time we gathered to train, we learned new things. I promise to train harder and harder with the club”.

Vị, the club founder, who ran with the kids at VTM, said: “The achievement of BD running club was more successful than I had expected –  two kids got on the podium and others had very great performances. On this trip, the kids had chances to meet and make friends with excellent runners who inspire them to join and try harder. It was great for the kids to meet familiar faces of Topas and runners like Quang Nguyen. They felt closer, welcomed and encouraged by the running community. After the race, they have become more confident, passionate and energetic.”

“All the kids who joined the race are excited to set higher aims for their next races. Those who didn’t joined the race, when seeing their friends, become more determined to join next time. The running club has also spread positive energy to other kids at Blue Dragon”, Vị added.

If you would like to make a donation to support the club or the great work of Blue Dragon Children’s Foundation generally, please visit their website here.

Blue Dragon has been working in Vietnam for 15 years to end human trafficking and to provide care to Vietnamese children and families in crisis.