VJM2019 70km Champion, Japan’s Hisashi is known for his confidence, speed and willingness to go all-out for the win. Here we learn about where his confidence comes from, how he trains to win and more. 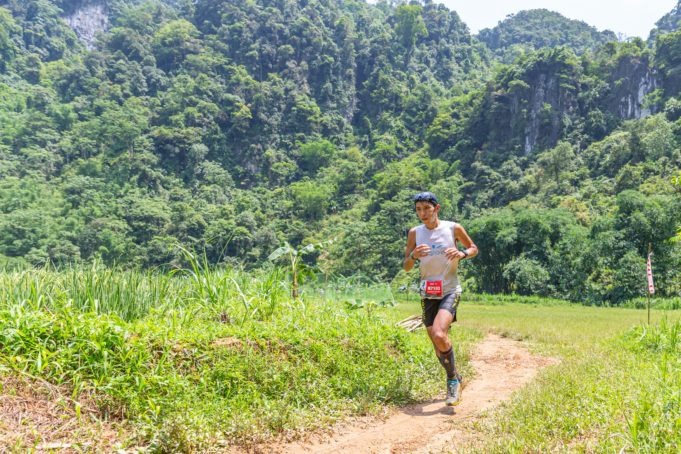 We know you ran road first – please tell us a bit about your running background.

I don’t have solid road running back ground and no sports experience in my school days. I was a normal guy who loved reading books 5 years ago. I started road running in 2016 at 30 years old as a typical ‘new year resolution’.  My first goal was finish the KIL marathon where I live and work. I trained for 8 months, did some halfs as preparation and found I’m good at running. By the time I finished my first full marathon in 3 hours 9 minutes, I would say running had become part of my life.

Why the move to ultra and trail?

In 2017, I decided to join a 100km road race in Malaysia.  It had 1700m elevation which I didn’t realise that when I registered. I had never trained for uphill races. It killed me, but I managed to finish in second place. It made me believe I have some aptitude for ultra-running.

I knew about trail running from books such as “Born To Run (check our list of books here which includes this – ed) – one of the my favourite books.  After the 100km race, I started thinking to start trail running. I found the Asia Trail Master website and registered for some races.  It changed my life.

Did you abandon road running?

Trail running fascinated me more than road – being free to run and walk the trail. I gradually shifted to the trail running. Trail running gave me back some passion for running and in fact I also got better at road running as a result. My PB is now 2:38 full marathon  I am a trail runner, but my favourite surface is road.

At VMM you were beaten by Hung Hai, but at Vietnam Jungle Marathon 2019, on the eve of the race, you were confident that you would beat him. Where did that confidence come from?

VMM 2018 was my first trail running year. I didn’t have much experience of trail running and I recognized myself as road runner. On Dec 31 I looked back at the year of 2018. I got some podium positions, I could say it was successful year as a runner. My question was “What should I do to become a better runner?”.

I listed up what I could do to achieve my goal, with many things on the list. One of them was to find a coach and I found “Mile 27”Andy DuBois. 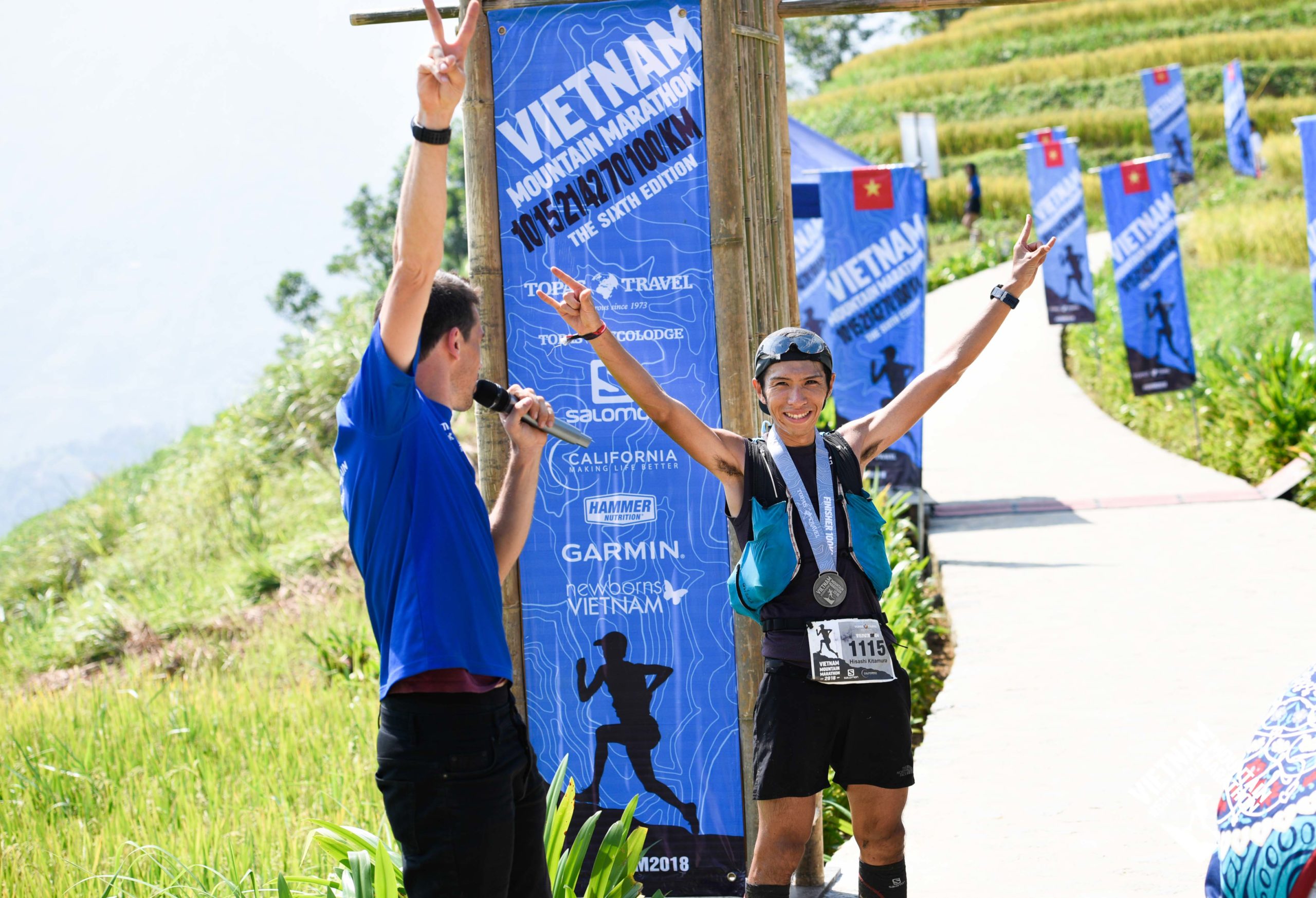 I believe his coaching worked well and my attitude to trail running was different from year 2018. I have decided to really become a trail runner. Before VJM 2019 I had achieved some good results and I was definitely stronger than VMM 2018. I strongly believed VJM would be my first victory that’s on the Asia Trail Master calendar.

You said you never pushed yourself like at the last 10km of VJM 2019. Please tell us more…

That was due to Veronica who is the female VJM 2019 champion. As I usually do, I started the race at a moderate pace and after 35km I changed my gear and started chasing the top group.  Around 40km, I caught up with Hung Hai.

He looked to be suffering. I thought it was a good chance to break his mind. I overtook him on the long uphill and kept running up hard until out of his sight. It worked, but it also cost me a lot. I’m not good at uphill. But It was necessary to be the winner. I was confident to win the race after I confirmed Hung Hai didn’t follow me.

But when I reached ‘The  Spike’, the toughest hill climb of the race,  the weather was getting crazy hot and my legs started cramping. It slowed me down and I imagined Hong Hai was catching up. After a while, I recognised a runner was coming from behind I saw it was Veronica and was surprised –  where were the male elites?

On the uphill, she was faster, on the downhill I could manage to run a bit faster than her.

After 50km, we could often see each other along the trails. I needed to admit she was the most powerful rival on the day. She looked fine even though I was suffering on the trail. We arrived final aid station with 10km to finish.

To beat her, I needed to give my everything to the race.  I pushed harder and harder on last downhill to the goal. I don’t know how many times I looked back to confirm the gap to her. I strongly wished my energy was enough to reach the end.

When I crossed finish line, I was 100% all-out. I was transferred to the medical tent on the spot and I couldn’t move for two hours.

You will run VJM 70k again this year – what makes you come back?

Yes. To defend my title and to take a step to become Asia Trail Master 2020 champion.

We know you have worked with a coach since the beginning of 2019 – how has the coach helped you and why do you recommend using a coach?

2019 was successful year for me as runner.

As I said, Mile27 Andy Dubois’s coaching has been essential for my rapid progress.

Andy’s weekly training plan, race strategy and post-race analysis have brought me to a higher level. Not only training and physical running abilities,

There is one story that shows how his coaching has had a big impact on my attitude and mindset before and during the race.

It was in March last year.

I joined Dalat Ultra Trail 70km in Vietnam, known for its runnable trail. I came second. It was very close to my first Asia Trail Master race victory. I was overtaken by Hong Kong trail running star John Ellis 4km before finish line. But 2nd was good enough for me. I was totally satisfied with the result. However, Andy analyzed my running data recorded by power meter Stryd and pointed out that I could have pushed more in the middle part of the race and I could have been winner of the race by pushing properly.

It means physically I was trained enough for winning and had a chance to beat a Hong Kong trail running hero, but mentally I didn’t deserve it.

I didn’t pursue the victory and settled for second or even third – it was enough just to be on the podium rather than take the victory.

The fact gave me some confidence and also I felt ashamed of my choice to go easy just for a podium position.

From that moment, I prepared and trained for race victory and now always run for the ATM win regardless how strong my competitors are. I always believe my training and spirit warrant a race victory and encourage myself during the tough times in the race.

Do you have a favourite intervals / structured style training session?

Truck interval training is one of my favourites. Like 1km x 10. By doing the same session, I can track my progress. I also do treadmill training often, I can set the incline and also do the speed training on the treadmill.

You were second overall in the ATM rankings last year – are you hoping to win in 2020?

Why not. I will be the Asia Trail Master 2020 champion.

Lastly, what advice would you give to a first time ultra runner?

I would tell them: “Pain is inevitable, but suffering is your choice”