This weekend should have been the VMM 100 Miles, but well known Hanoi-based runner, Nguyen Dang Trung, did not let the race being postponed stop him achieving the 160k+ milestone. Learn about the motivation, friends, gear and tactics that got him through the long, hard hours indoors. 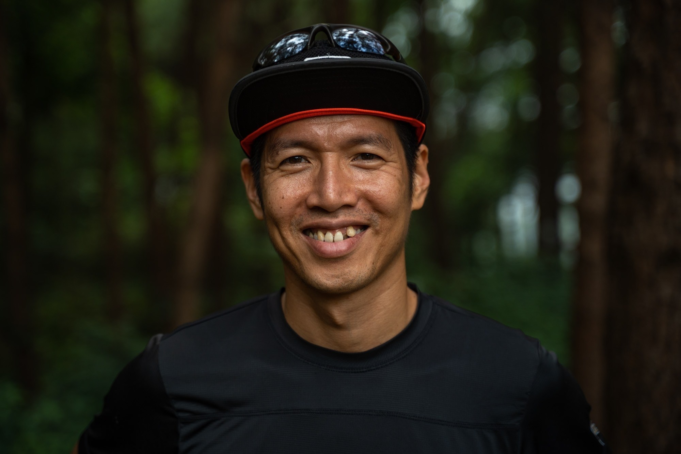 We knew you were a tough runner having done the Everesting+,  so you must have been confident about completing, but was there ever any doubt before or during?

Ah no, there has never been any doubt that I could complete. I know it’s just a matter of time. I have gone through bad patches, low moments, injuries in races in the past, and overcame them. Those experiences gave me the confidence and self-belief that I could finish it. I joked that the treadmill breaking down may be a reason for my possible quitting.

What was your tactic? Try and stick to a max pace / max heart rate, or simply run on feel?

To properly record the run, I used two Stryd pods (one I bought and one I borrowed) on two shoes, connected to two different watches (Coros Vertix 2, and Vertix 1) for back-up, in case one system fails. The battery for the newly launched Vertix 2 (up to 140 hours of full GPS mode) is really crazy. I know indoor run is not reflective of GPS usage but still, the Vertix 2 only consumed 4% of battery for a 17 hours indoor run.

Stryd is a foot pod that is supposed to measure our running power, similar to power meter in cycling. Basically it tries to measure our efforts, regardless of inclines, terrains, and wind speeds.

I did not aim to run for a good time. I was just hoping to casually complete the 160k, with a lot of walking towards the end, especially after 100k. I expected to finish at the same time with the elites in UTMB finishing their race (20+ hours). 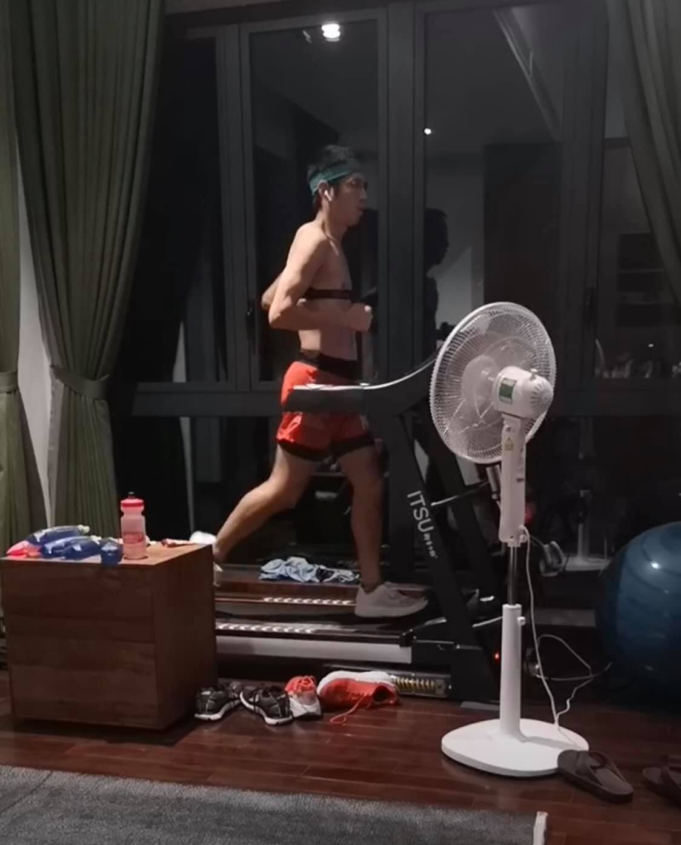 You had a lot of support – how did that help?

I was actually surprised that so many people followed me and supported and cheered for me. In fact, I did not plan to do a live stream at all. I wondered who would want to watch me running in place while there is UTMB live going on. I just wanted to do a short live stream to show I’ve started running, but people watching told me to just leave it on, don’t stop it, and so I did.

So from Saturday 7am onwards, I was almost constantly on the phone, chatting, interviewing, talking, catching up with friends. Some people called from Singapore, some from Hong Kong. Some know I like to chat while running and they kept me busy on the phone. The talk can last anything from 20 minutes to 2 hours. Or when I tripped and almost fell, or when I started walking, I got calls coming in to check if I am ok.

Thanks to this support, I received huge doses of mental energy, and ran at a level way over my own expectation. I found it hard to walk when I know my friends will have concerns.

I’d like to take this opportunity to thank everyone who has followed, supported and cheered for me.

Besides the personal challenge, was there any other reason for doing this?

The main reason is I was quite itching for some challenge after being locked down for months and I’ve gained some weight. And I’ve missed UTMB two years in a row after having secured a place in UTMB 2020. And this is VMM 100 Miles week; I would have been thrilled to run VMM 100 Miles this weekend too and would have given it my all.

After I just casually posted the idea on my FB on Monday, a lot of people actually encouraged me and helped me to spread it to a wider audience, making it more public and visible. They said the mood of the running community is pretty down amidst lengthy lockdown and hope that my run can inspire people to: [1] keep fit, and [2] stay positive when confronting challenges in life ahead like the lockdown we are having.

I’d like to send a message to my running friends that do not be discouraged by the lack of training or low volumes. I have received messages from friend saying they would postpone VMM 160 (even if it takes place in November) due to the lack of training. Just keep working out at home (dong squats, calf raise, core ..), everything helps. Running ultra is probably more mental than physical. So when lockdown is over and races open up again, just go for it. Go for the distance that you had wanted to do originally. You never know if you would surprise yourself on the day, especially if you mind is at the right place and being surrounded by like-minded people. And that performance, against all odds, would be even sweeter.

After the run, I was in awe to see so many positive responses. I saw so many people posting crazy tracklogs of all sorts of activities (running, skipping ropes, swimming ..) with the words that they did so to support me in various communities, especially the Coros Vietnam page.

And in fact, I know of 3 other 160k runs over the weekend by other runners (by Nguyen Thanh Canh, Huong Bui and Tri Tran) and 1 successful Everesting effort (by Tra My). Most notably, Canh not only ran 163k, but he also climbed 10,800m elevation gain, all in 39 hours and all inside his own 3 floor house. To be honest, I am not sure if I could do stair repeats for 39 hours like him. So those are real inspirations too. I just happened to receive more attention – I am not sure if I deserve it any more than them. My congrats to them all for their amazing efforts.

What was the hardest point? And how did you get through it?

There are a few hard points but by far the hardest point was at the 100k mark. I ran 100k in under 10 hours ( in 9:52), and my calves struggled to get up running again. I tried to get up running again after 7 mins, another 5 mins, another 5 mins .. . And it took me around 35 mins to get back up running. What really helped was Tuong Duy Dung, a key member of VKL running club who came by to support me at the right time. Just his presence, his chatting with me really helped to take my attention away from the soreness and got back to running.

We see you had several pairs of shoes – what kit did you use and how?

I used 3 pairs of shoes as I learned long ago that my legs feel a lot better when I change shoes during my long races. The very minor change of the footwear changes the running gait very slightly, but may be enough to solve problems or fatigue.

I started with Hoka Rocket X, a very fast carbon-plated shoe. After 40k I changed to Hoka Rincon 2, a lightweight but still cushioned shoe. After another about 60k, I changed to Altra One, which is an old, very lightweight road racing shoe, which will also change the running gait slightly due to its zero drop. I ran with the Altra One until 150k+ where I developed a strange (injury kind) of pain in my left foot. I switched to Hoka Rincon 2, and it worked for a few km. At 155k, I switched to the Rocket X, and was able to manage and run until the end.

I wore T8 Sherpa short and T8 underwear. Those are my favourite. Previously I was on a constant search for better gear, but ever since I found T8, I stopped searching. I ran without having to use any lube at the start and only had to reach for the lube after 120 or 130km.

How did you feel right after and how do you feel now two days later? And …. what is next? Knowing you, there is probably already an idea brewing?

The feeling right after is a mix of extreme emotions from euphoria and relief, plus a sense of accomplishment from having to dig deep, to overcome some challenges along the way and to exceed my imagination by far. The similar kind of feeling I sometimes get when I have done really well in races.

Tears were actually rolling down my cheeks in the last few km. It was pretty hard to hold back the emotions. Some people in the audience managed to spot that.

After 2 days, the mind is a lot calmer and what I got left is a sense of calmness, of accomplishment and of course, muscle and joint soreness.

I do not have any crazy idea in mind yet. I really look forward to VMM 100 Miles in November and hope it can take place.

Lastly, your kids have seen you on the bike for a long time doing the virtual Everesting indoors, but this is another level! What did they think?

They have no idea. I have 2 kids, 6 and 8 years old. The 8 year old came in my room a few times, looked and smiled at me and then left. The smaller one had no idea what was going on and was busy playing by himself!

To read more interviews with runners, see our Q and A archive here.