You are here: Vietnam Trail Series » Q and A with Kim Matthews
Newsletter

Q and A with Kim Matthews

Australian Kim Matthews won the VMM 100km in 2017. In 2018 she will be racing Vietnam Jungle Marathon and then plans to defend her VMM title. She began the sport 10 years ago with 5km events – read on to learn about her journey to become a multiple race winner, her training, nutrition and more 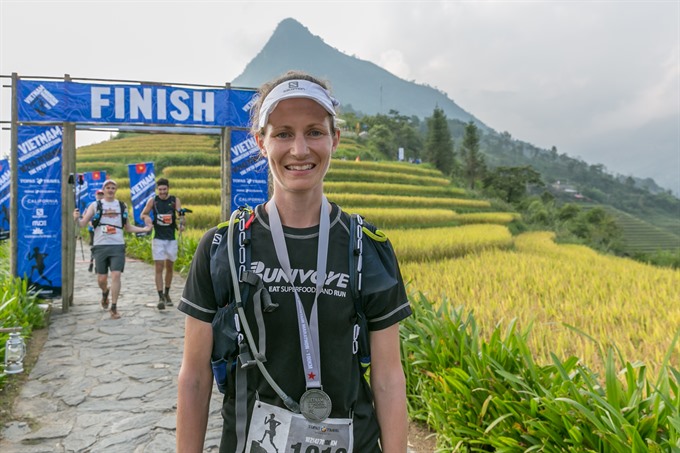 What is your sporting background and what got you started in long distance running?

I was fairly active as a kid, participating in Little Athletics and netball for many years. My husband and I started running almost 10 years ago. We ran a local 5 km race and instantly loved the sport. Over the next few years we joined longer and longer races, eventually reaching the marathon distance. Two years ago I ran my first ultramarathon, a 50 km race in my home state in Australia. Now I focus almost exclusively on trail running.

Did you start out by placing highly in races, or did success come later?

I was never a great road runner. I didn’t have the speed to keep up with the strong field of athletes in Australia, and the best I could manage was a couple of third places. The first race I won was the first ultramarathon I completed. Not long after this race I moved to Asia, and have been fortunate enough to have several more victories to my name.

Your Run Eat World platform shows you place a lot of emphasis on your veganism. Did you run before becoming vegan and What impact do you think it has on your running?

I turned vegan about 2.5 years ago, when I started training for my first ultra. I had taken a six month break from running before this change in diet, so it’s hard to know exactly what impact veganism has had on my running. I do know that I have heaps of energy, I recover quickly enough to allow my body to handle high training loads, and I have no difficulty fueling for my longer races. I became vegan mostly for ethical reasons, and the fact that my running performance has improved dramatically in this time is an added bonus.

What is your typical meal the night before the race and what do you have for breakfast pre-race?

I travel for nearly all of my races, so my meal the night before a race changes depending on what is available in the city I am in. I try to aim for a dish with plenty of carbs, which in Asia generally means noodles or rice. Back in Australia it was always pizza, but finding a vegan pizza in small villages in South East Asia is virtually impossible!

For breakfast I eat Runivore oats and chia seeds, which I bring with me from home. I soak them overnight in water, then add cinnamon, dried fruits and a banana and I am good to go.

You are now based in Ho Chi Minh City – where do you train for trails and the mountains?

Being based in Ho Chi Minh City makes training difficult. Nearly all my mileage is completed on the roads, using bridges and stairs for hill practise. If I get the chance I will take a weekend away to a town where I can run up mountains and off-road, but this is not as often as I like.

What is a typical week of training for you now in the pre-season?

After my last race I took two weeks completely off running, giving my body a much needed break. I then slowly reintroduced shorter, easy runs before getting back into full training. I’m now back up to 100+ km weeks, including 1-2 long runs plus a speed session. I also try to do some form of strength or core workout a couple of times per week to help prevent injuries and improve my running form.

How do you taper for the last week pre-race?

The taper differs depending on the length or difficulty of the race. Usually I will stick to short easy runs, between 5-10 km, and the only speed work I will do are a few strides. I find it hard to run so little during the week but I know this will bring out my best performance. I don’t change the amount of food I eat too much until the day before a race, when I eat a bit more than normal. I do increase the percentage of complex carbs slightly, starting a few days out, to make sure my glycogen stores are topped up before a race.

Road runners can pick a pace and try and stick to it, but of course that doesn’t work for a trail race. What pacing tactics do you use to ensure your effort is measured?

Pacing is purely based on feel. I don’t try to hit specific numbers and I don’t check my pace on my watch. I do my best to keep my pace easy from the start, knowing the effort will only get harder as the race progresses. I should be able to have a conversation with someone as I’m running along a flat or downhill section, and I walk most of the ascents. It’s better to go out too easy than too hard, and it’s a fantastic feeling having a little energy left in reserve for a kick at the end.

Back to VMM, what was the hardest part and the best part? Perhaps they were the same…

The hardest part was definitely the final hill. I think it was the steepest on the course and I had to use my arms to help pull me up some sections. Coming down wasn’t easy either – the sharp rocks were like daggers in my feet, causing me endless amounts of pain. But knowing the finish line was so close helped me push through the torture and run out the last few kilometres on the road.

The best part was sunrise. We had been running all night with no idea what was around us. When light started coming into the sky I discovered I was in the middle of a valley surrounded by looming peaks and picture-perfect rice terraces. I found myself constantly stopping so I could take it all in. It was the best scenery I have ever witnessed in a trail run.

Do you have any advice for people who are considering the 100km for the first time?

Get yourself a training plan which includes progressively longer runs, but also schedules rest days and recovery weeks. Make sure to add a little speed work and some strength training. On the weekly long runs it’s important to practise your nutrition and hydration strategy so you know what works and what doesn’t work for your body. Also wear all your gear, shoes and clothing that you will wear on race day in your training runs, so there are no surprises during the race. Lastly remember to enjoy the experience, because no doubt you will meet wonderful people and be surrounded by incredible scenes that will stay with you for a lifetime!