You are here: Vietnam Trail Series » Q & A: Trang Hạ – The running writer

Trang Hạ is a famous writer in the Vietnamese running community. In 2018 she will be the first female runner from Vietnam to join Boston Marathon in the USA and she then plans to come back to run 70km at VMM. Having started running quite late with 10km at VMM2015 at the age of 40, her running stories have inspired many – read on to learn about her journey to become a marathoner. 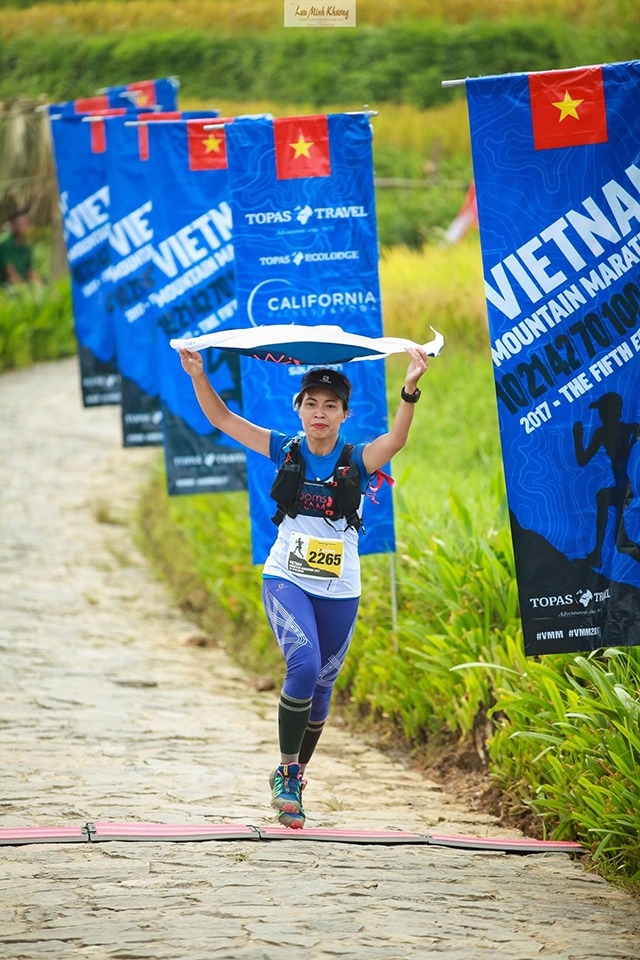 1. Please introduce yourself to our runners?

I am a 43-year-old mother of three – two boys and one girl. Our house in Hanoi is also home to 11 cats. I do part-time jobs for a living. In 2017, I was voted by Forbes Vietnam as one of 50 Vietnam Most Influential Women. In 2018, I will attend Boston Marathon in the US and have a plan to run 70km at VMM. These are three milestones of my life and two of them are a direct consequence of VMM 2015. I thank Topas Travel for giving me such beautiful feelings and kick starting my running!

2. What is your sporting background and what got you started in long distance running?

In 2015, I was given a pair of Speed-cross 3 shoes and a slot to attend VMM 2015 by Salomon Vietnam. Since I had never run before, I chose to run 10km. I did not know that each running race is such a colourful and emotional festival! At the closing ceremony of VMM 2015, I promised myself that I would return to Sapa as a runner! From then on, I started running. It took me one year to complete my first half-marathon and two years for my first full marathon.

3. Which do you prefer: running on roads or trails?

I like both! I love the scenery along the route, I love the mountains and jungles, but I also do love running in crowded urban areas. When I move on my feet, the world seems to become more friendly, people become more attractive and curious. However, running on trails brings a sense of discovery and surprise, amazing scenery and many more challenges. Therefore, I think trail running brings more wonderful things to me.

4. You once stated that you would stop running after completing your first marathon, but now you plan to do VMM 70 after Boston. What changed?

I saw the full marathon as the ultimate goal of a runner. Once you’ve reached your finish line, you have to stop and switch to another kind of sport! But after running my first FM, I understood that a marathoner is a person who comes to the start line, not the name of a person at the finish line! And so, I go on running!

5. You’ve said before that you are normally one of the last finishers at races, did you ever think of giving up along the route?

I run, badly and perhaps ugly. I have no plan, no strategy before every race, so, I’m trying to improve my performance to get out of the “death march” in races. The last finisher is often known for their persistent and inspiring stories in media coverage…I experienced this, but felt embarrassed of it. Many of us come to running because we want to become better people (?), so why would we not want to improve our running ability? I don’t want to be the last runner anymore!

6. You are known as a famous writer with many best-selling books. Do you think there is a link between writing and running?

Running helps me to reset my mind and prepare it for new emotions, new experiences, new plans. Running also helps me to manage my emotions and accumulate energy for every day. I hope my next best-seller will be about running!

7. Back to VMM, is there any interesting story at the race you would like to share with us? You have inspired many with your beautiful stories about runners before.

Because VMM is a difficult voyage for them, some of them got high blood pressure. Some of them also had rheumatoid arthritis. They left a very deep impression on me. They were older than me, weaker than me and yet they all could run 21km! I would like to meet them again to say hello. Thanks to their stories, I could see myself many years later: an old lady running VMM with a stick! I knew then I would definitely join this race and change my life!

In 2017, I returned to Sapa and brought my whole family: my husband and my sons ran 10km. In 2018, I have not registered yet because I am saving money for the Boston Marathon race. After that, I will register VMM 2018 for my whole family. VMM has not only changed my life, but also changed my family’s.

8. You ran with your two sons at VMM17. How did you inspire them and your family to run?

I often set a target for my sons. Sometimes a cafe or a park which is 1km away from our home. They can also choose to run to their favorite place. Most of the rewards in my family are linked to athletic or academic performance. My kids really love the atmosphere of the races.

Running, swimming, playing chess and cycling are all part of my family’s weekly activities. We have had no television at home for six years now. We have bought a lot of children’s books, learning apps, and spent money on their sports. At VMM 2018, two 7-9 year olds will run 10km. I hope in 2019, my 10-year-old son can run 21km.

9. You crossed the line with the Newborns flag. Can you tell us more about this organization and the reason you chose to represent them?

I was really moved when being recommended by Topas Travel to join in the running team to fundraise for Newborns Vietnam two weeks before VMM2017. This is the organization for newborns in Vietnam and I had the chance to learn about Newsborns from the Nursing and Neonatal Training Program in 2017. Thanks to following the Ironman 70.3 race, I know David Lloyd, VMM Race Director and also the representative for  Newborns at the race. I hope I will also be able to contribute a small part to Newborns, through sports activities, to bring chance of life and the best care to more babies in Vietnam.

10. You are active in LDR (Long Distance Runners) – what do you think about the running community development in Vietnam in recent years?

Running brought me a large community of friends who all love sports, have active and positive mindsets and a healthy lifestyle. LDR Club has become the solid foundation for my running. I believe that this year, running and triathlon will get much more attention and the running community will attract more runners than that of last decade combined together. There will be more new races and many excellent individuals will move on to the overseas races, or evolve from runners to  organisers, bringing new races and developing the community further.

11. What is your advice for new runners?

The most difficult distance for a runner is not 42,195km, but the 1km from your warm bed every morning! If you can run that 1km, you can get to the finish point at any race!