Chau Smith was born in Vietnam but now lives in San Francisco. She has run more than 70 marathons and in 2017, for her 70th birthday, she ran Triple7Quest: 7 marathons on 7 different continents in 7 consecutive days. Chau Smith will be on the Vietnam Trail Marathon start line together with her husband for the inaugural event. Read on to learn about her running, inspiration and more 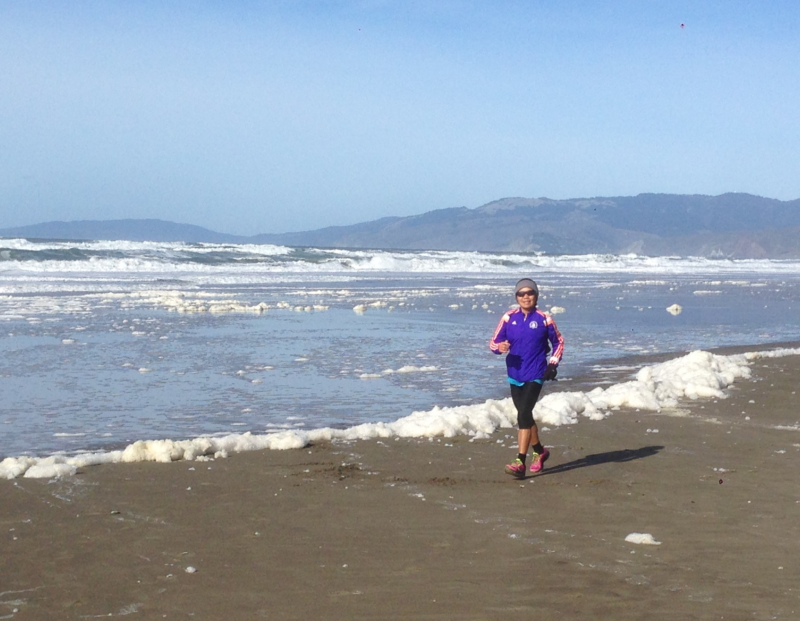 1. What is your sporting background and what got you started in long distance running?

Growing up in Vietnam in the 1950’s and 1960’s, there weren’t any opportunities for females to participate in sports. It wasn’t until I came to the United States in the 1970’s that I took an interest in sports, such as swimming, primarily to stay healthy.  My husband ran marathons before we were married. After we married in 1983, I rode my bicycle behind him during his training runs. After a few months of that, I put a away my bicycle and began training with him.

2.When was your first race and what was it?

My first run was a 5K in 1985. I had a sinus infection and was on antibiotics and was not properly hydrated so after I crossed the finish line I collapsed and the medics rushed me to the medical tent and hooked me up to oxygen. I was fully recovered an hour later. On my way home I told my husband I wanted to run a 10K, next.  He told me to think it over since I had almost died doing a 5K. Not one to shy away from a challenge, my second race was a 10K, and 3 months later I did a half-marathon, and never looked back.

3. How many marathons have you run? Which result are you most proud of and why?

I have run over 70 marathons – actually I have never sat down to count. I think my first Boston qualifier gave me the most satisfaction. The first time I tried I was 9 minutes short of qualifying. Then the following year the qualifying time was lowered almost 6 minutes so I was going to have to run 15 minutes faster. Two months later I ran on an extremely hot and hilly course in my home town in the Midwest. I intended on running for training only. I hadn’t realized how fast I had run until I saw I had qualified for the Boston Marathon.  One month later, I qualified again with a faster time.

4.You ran 7 marathons, on 7 different continents in 7 consecutive days for your 70th birthday and added one more only a 2 days later while waiting for your flight from Chile back to the U.S.

My husband and I had just finished running a marathon on each continent over a 15 year span.  Our last marathon was in Australia, in 2014. We ran Australia with a group of runners who had signed up with a running/travel agency called Marathon Adventures.  Marathon Adventures (Steve Hibbs, owner) put together the Triple 7 and invited me to participate.

I never allowed myself to think of quitting, even during 90+ F temperatures in Australia or the freezing rain in Antarctica.  Every time the going got tough, I thought of my younger brother who had a stroke and could barely walk. I thought how lucky I was.

5.What made you go for the Triple8Quest following the Triple7 ? And what will you do for your 80th now that you have done the 8 already?!

The running/travel agency, Marathon Adventures put together the Triple 8.  I was an easy sell for them because we had run together during the Triple 7 and they knew I was goal driven. I never want to put limits on myself. On or before my 80th,   I am planning to finish my trek up Kilimanjaro which was cut short by the stomach flu in 2016. I had run a marathon at the base of the mountain and 2 days later I did the hike. I made it 3 days to 14,000 feet before I got sick, one day short of the summit. I don’t like unfinished business

6. Having been running for almost 30 years and at more than 70 marathons (and counting on), you must have many running stories to tell. What is the most memorable one?

During the last 2 miles of my marathon on King George Island in Antarctica in 2018, I pulled a muscle in my back.  It was so painful I could hardly walk, much less run. This happened during a day that had gone from mild weather, to rain, to freezing rain and finally, to snow, with a wind blowing at 40 knots. I finished doubled over like an old woman, but I finished.

7. During all your events you must have learned many running lessons. Looking back, can you pick out one or two things you do differently now compared to when you lacked experience?

Like all novice marathoners, I tended to start out too fast.  I always paid for it around mile 20 when I began to run out of gas.  Now I am aware of my need to pace myself which leaves me enough energy for a strong finish. Also, I always thought I had to train by doing long runs, even 30 milers while training.  Now I realize how important taking rest days help keep my body in top shape.

8.Do you have a running hero/inspiration?

Kathrine Switzerland, the first woman to run the Boston Marathon.

9. What is your typical week of training? And has this changed much over time?

10.How about nutrition during a marathon?

I usually consume 3 to 4 packets of Gu.

11.Do you have any advice for people who are new to running?

Be reasonable with what you think you can accomplish.  Start with the shorter runs and work up to longer ones. Overdoing it by running too fast or too long or too often results in injury.  Once you are injured, it is too easy to quit. Also do not think that running is an easy way to lose weight. Losing weight takes a healthy diet and plenty of exercise. Over-weight runners will experience additional stress on their hips, knees and ankles which also increases the risk of injury.  My advice would be to lose the weight by changing eating habits and diet, before attempting to run any long distances.

12.What do you think about the effect of age on running?

I know running has kept me healthy. I don’t take any medications.  I am able to run marathons at the age of 70. I don’t believe running is for everyone but exercise is absolutely necessary. Walking, biking, swimming or some form of exercise each day will certainly lengthen your life.

13. Regarding VTM, is this your first marathon in Vietnam? What are you most looking forward to about your visit here?

This will be my first marathon in Vietnam. I have never seriously considered running in the south, where I used to live, because of the heat. But I met some runners in DaLat last year where I was vacationing and they got me excited about running in other parts of Vietnam. So when I saw the VTM advertised, I jumped at a chance to be a part of a well-organized run in such a beautiful area of my homeland. I want to take it easy and enjoy the scenery, no PR or BQ. My husband and I are hoping to do some sightseeing in association with the run.