Kim Jisub is a South Korean trail runner from Wonju. He is winner and course record holder for VMM 42km 2017. He is now a member of the North Face Korea Athletes  team and has won all of the The North Face 100 Asia Series in which he has participated. He has also completed the Tor Des Geants (330km) twice. Kim Jisub ran his first full marathon at 17 years of age.

In this Q and A you can learn about his sporting background, how he trained to smash the VMM record and his plans to come back for a shot at VMM 70 and 100 records in future. 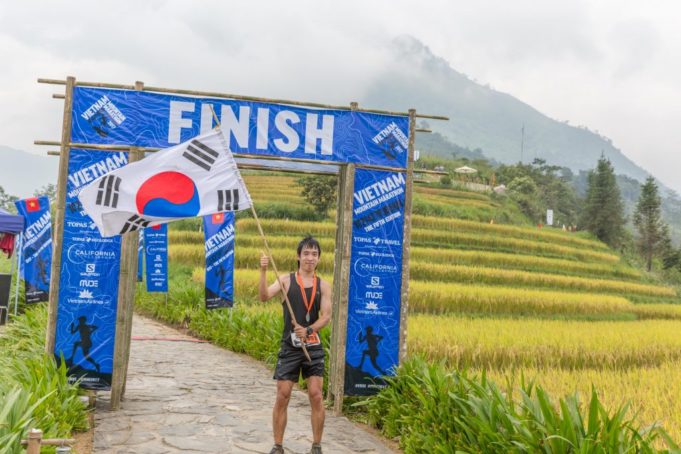 1. What is your sporting background? What got you started in trail running?

I’m an amateur athlete and have never been trained or supported as a professional runner but was served in the special forces of the Korean army for 4years. The training in the special forces was very demanding and harsh such as running or walking with the really heavy backpack in the long distances of the mountains. I did it countless times. As the result, it helped me a lot to be a competitive trail runner.

2. What made you decide to come to Vietnam to run VMM?

I heard of VMM then was more interested in not only VMM but Sapa after watching TV program introducing Sapa and Vietnam. Then there was the news that the Korean group was organized for VMM, and I jumped in. I usually take the races in overseas alone. VMM was exception.

3. What is a typical week of training for you now in the pre-season?

A lot of snow in the winter of my hometown, and the freezing weather prevents snow melted until the spring comes. it’s the unfavorable condition against trail running. I spend most of the pre-season in running the roads and treks.

4. What is your favourite training session?

I love uphill-training and sometimes repeating run up and down the peaks of the mountains.

5. Your pace at VMM was very fast. Do you do lots of interval work to build your speed? If not, how do you do it?

The interval training is essential to achieve a good record. I do it usually once in a week but twice in a week if necessary.

6. How do you taper for the last week pre-race?

The more you train, the more you eat. But the amount of training and meal is getting reduced from 10 days before the competition, and the regular hard training is replaced by mild jogging.

2~3 hours before competition I have well-digested food such as banana or Korean rice cake. Vietnam rice noodle should be nice too. 30minutes before the race electrolyte-tablet and energy-gel mixed with water is also helpful. (2pieces of energy-gel and 1piece of electrolyte-table are mixed in 500ml of water bottle. The point is to have leisurely sips instead of drinking.) In the early part of racing absorbing the energy-gel hourly is desirable, but over the course the intervals of absorbing should be reduced. It should every hour at the early stage then every 40 to 50minutes later

8. Your pace at VMM was extremely fast and you broke the record. How did you pace your effort – on feel alone or do you use heart rate or other techniques?

I could have crossed the finish line earlier, but I got lost in the middle of the way, leading to delay. When returning to the path another runner took the lead from me, and I was the second ranked. Before long I took the lead back but failed to control the pace because of nervousness. I am sure that I can finish the race earlier if given another chance. I have no specialized technique other than never walking or taking breaks throughout the competition.

9. What was the hardest part of VMM?

It was too hot and humid

Everything was great. The trail offered a unique opportunity I’ve never experienced before I had many overseas competitions though. Top-level management of the competition was very impressive. Furthermore, it was the fantastic experience to run off the beaten corners of beautiful and natural Sapa where locals lives. Above all, the contribution of VMM for Sapa including that part of entry fee is contributed to the local communities is very meaningful to me.

11. We hear you are thinking of coming back for the 70km – is this true and what time will you target if you come… another record breaking performance?

I hope my record for 42km will continue to lead to my new ones for 70km, 100km in VMM. Please look forward. Soon I will be back there.