World Champion Dualthlete, World Champion Cyclist and more recently winner of the 100k UTMR race in which she beat all the men to claim first overall, Emma Pooley’s first love was running – here she tells us about how she fell in love with it, what makes mountain running special, a little about her time in Vietnam and much more besides. 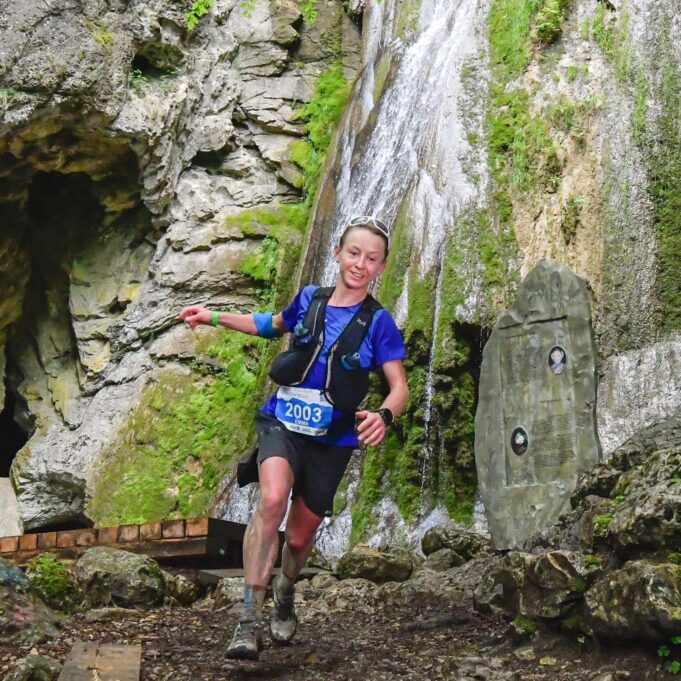 We know you love to ride bikes for adventure now, but your first passion was running. Can you tell us how you got into running and a bit about your early running background?

As a child I wanted to run because my dad ran, every morning. I guess he’s a role model and a bit of a hero for me; I still think of him as a fast runner now even though he claims he’s not raced since his school cross-country championships in the 60s (and in fact, due to sore knees he doesn’t run now at all).

It was a big deal for me when I was allowed to go with him and try to keep up for his 25 minute morning runs! But that’s how I got into running, and it became my first love – I went out early every morning, like clockwork (or a religion!), from the age of about 13 to 19. Almost always alone, and the solitude and “me time” were an important part of it. I was in a running club but training and racing were less important to me than my daily routine of running.

Racing was also part of my love of running though – in fact my first taste of sporting “success” was (as a total outsider) winning the very first cross country race I did: the county U15 championships. It was a good feeling I have to admit, and I wanted to be a better runner than I ever was. I raced for my school, my county, and then for Cambridge University… but always with more enthusiasm than talent. Hills, mud and silly challenges were more up my street than actually running fast, and I was never a fan of racing on the track.

How did you go from runner, to reluctant cyclist, to world champion cyclist?

I only started road cycling aged 20, as a way to cross train when I could not run for 6 weeks thanks to a stress fracture in my foot. It was probably due to too much enthusiastic distance, possibly also poor diet – I wasn’t eating enough protein and calcium back then.

I really did not enjoy cycling at first: borrowed bike that didn’t fit, a horrifically uncomfortable saddle, and the cheapest kit and shoes that ‘student me’ could afford.

I didn’t find the same joy in early morning solo bike rides that I had in running, but luckily the cycling club I joined provided an alternative pleasure: good company! Through Cambridge Cycling Club I learned to ride in a group, fix a few basic roadside mechanicals, ride at sociable-chatting pace, and eat half my bodyweight in cake at a café stop.

I also learned how to ride hard, really hard: the weekly chaingang rides were legendary and I’m still proud of the first time I made it round the whole way without any helpful pushes from my friends!

A friend in CCC persuaded me to go to my first road race, and it was a long way (and many years) from that to a world championship, but she planted the seed for me. My first coach, the wonderful Tim Williams, was also in CCC and he played a key role in helping me make it to world class level: by guiding my training and teaching me descending skills that I very much lacked.

For most of my pro cycling career I worked full or part time as a researcher at ETH Zürich, and I was very lucky that my supervisor (the awesome Dr Sarah Springman) gave me the flexibility to make that possible.

In summary though I’d say that my journey to a rainbow jersey was largely due to luck: being in the right place at the right time (and that initial injury). Plus my resolve to take opportunities that came my way. Plus the support of some wonderful people including Tim, Sarah, and the staff of my little team in Switzerland in 2007 when I first had the support and the chance to get results. 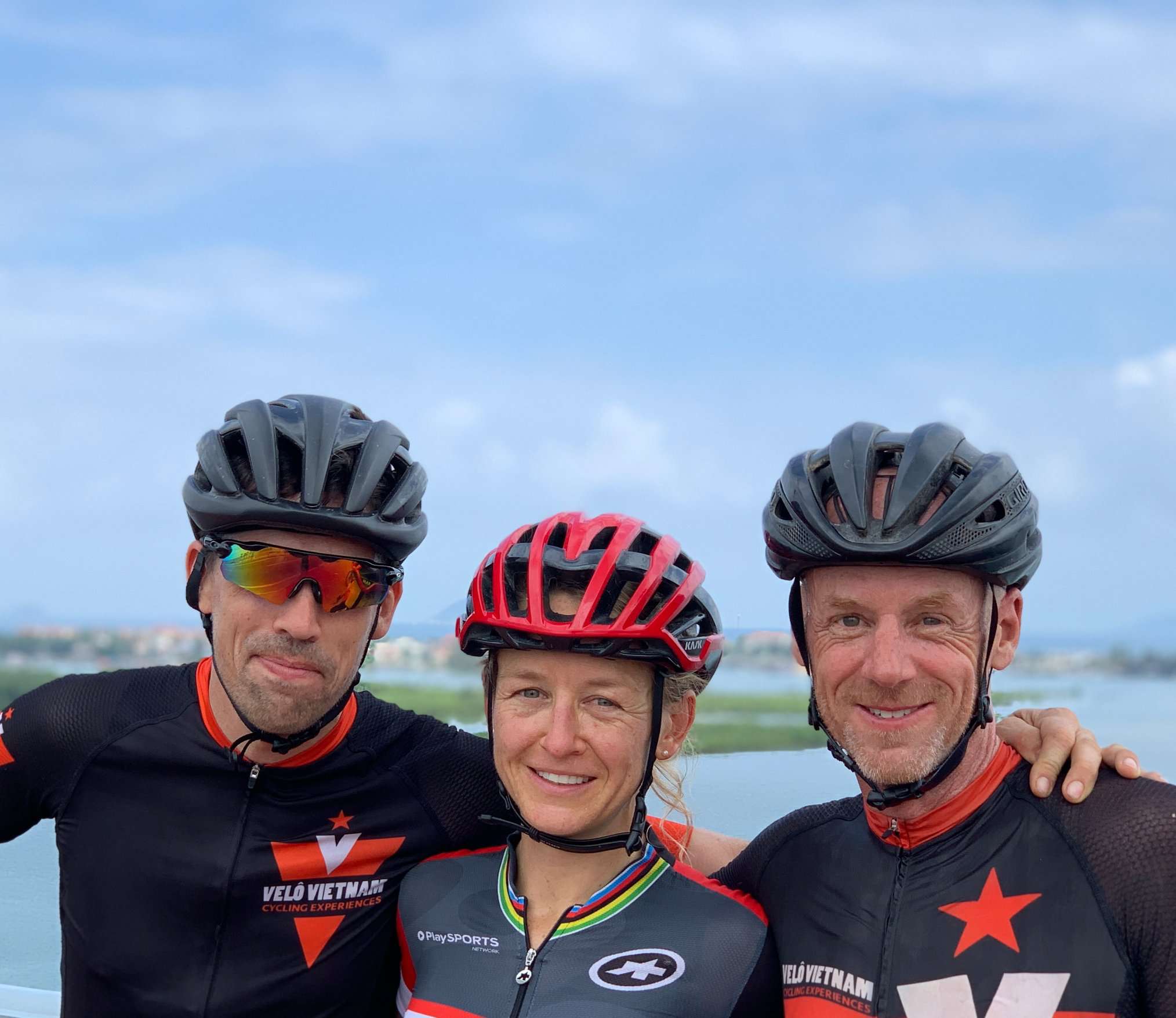 Emma with VTS Director David and Ashley Carruthers at the end of her Vietnam-Laos-Vietnam ride in Hoi An.

That’s very insightful! Yes, in some ways… when I first won at Zofingen it was due to a strong second run, and I was delighted that all the years of hard cycling training (and only being allowed to run in the off-season) had resulted in actually being a faster runner than before. I guess all that endurance training added up!

And because I’ll always be a runner at heart, it meant a lot to me. On the other hand it must be said that the field in pro cycling is deeper, and more competitive, than in long-distance duathlon. So the time trial world title was probably harder to get!

These days you seem to do as much as you can to stay off the tarmac, whether running, riding or carrying your bike over mountains. What is it about the trails and going uphill on them that you love?

I simply love being in the mountains, and out in nature. The beauty of the surroundings is, literally, awe-inspiring. It makes me happy to be in those beautiful places. Sometimes there are nice roads in the mountains, but quite often they have traffic, and it’s loud, and I find that increasingly annoying. So off-road is attractive for that reason. Plus I like to feel that I’m exploring – even though of course, I don’t ride anywhere “new”. But sometimes I just wander, by bike or on foot, and with the help of Komoot and maps and signposts I find a way through or over instead of going around (on tarmac) and I just love that! 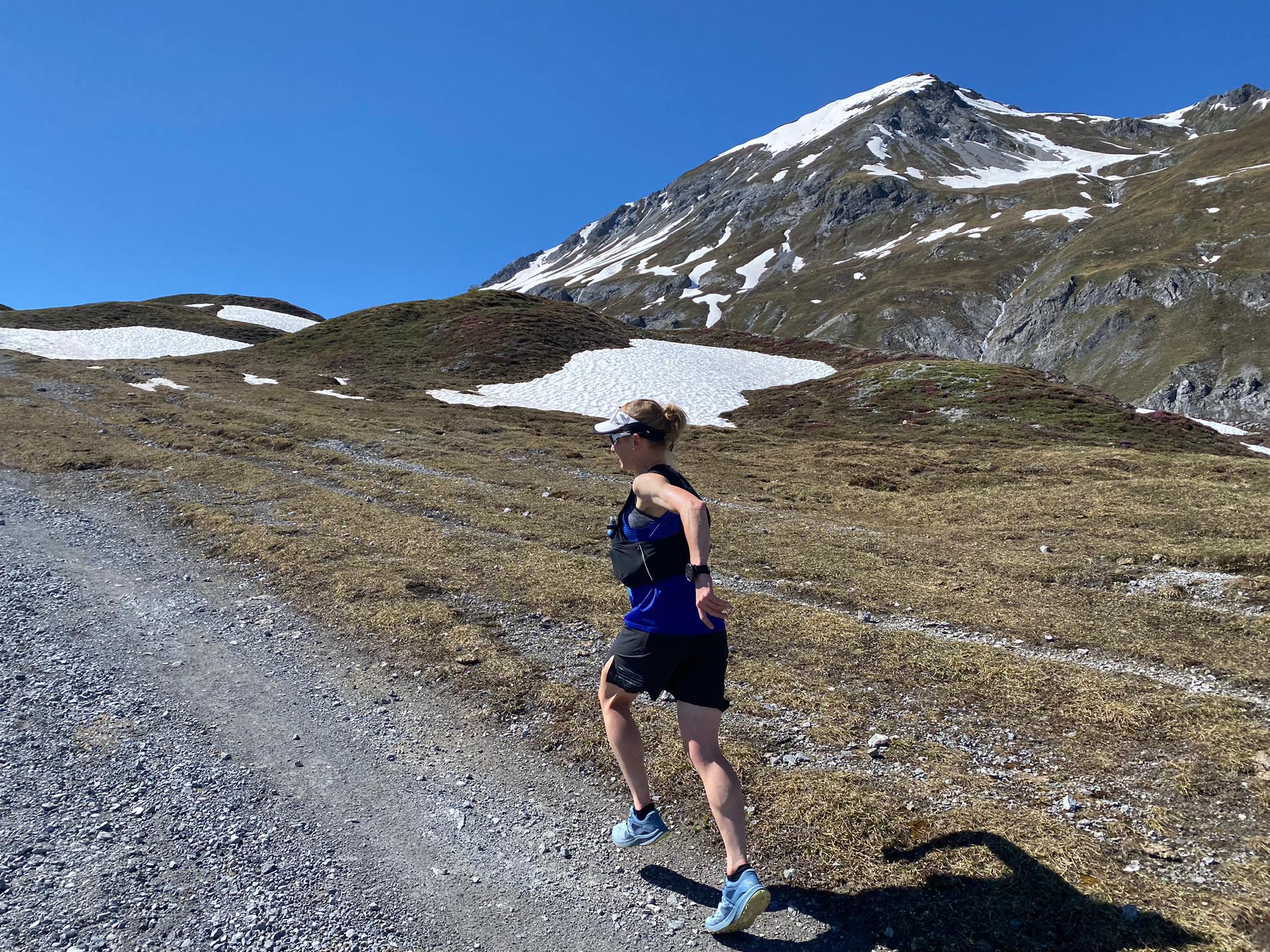 Emma in her happy place: running high in the mountains

Aside from keeping fit, what benefits do you think long distance riding and mountain running bring?

For me, these sports also bring a mental benefit. It’s almost meditative, I find, to run or ride for many hours – often alone. Actually this also applies to shorter runs and rides! There’s something about the simplicity of the motion, and the purpose, that helps me empty my mind and be peaceful. Beautiful scenery is also helpful! And the physical challenge makes me happy, because it’s satisfying to push my limits somewhat (maybe not every day though, it’s tiring!).

You recently sent over a load of running gear for Blue Dragon Run Club and promised to run with them when you make it back here. Apart from a trail run (we hope!), what kind of training session will you run for them in the city? Perhaps a favourite intervals session of yours?

Oh, that’s a tricky one! I’m not sure I’ll be able to keep up with the kids from Blue Dragon because they look fast and these days I’m more and more into endurance pace. Most likely I’d suggest a fartlek style run, for example 40 minutes of 1 minute hard : 1 minute easy. That kind “off-on” training has always been my favourite hard session. Plus I might have a chance of catching up with the young’uns during the minute “easy”!

You’ve been to Vietnam before to ride, but you also got some running done on that trip. What did you enjoy about your experience here and what makes you want to return?

I just enjoyed everything about my biking journey! Even the interminable hot-dusty-washboard-gravel day (one of my toughest rides outside a race) was fun, in a type-2 kind of way.

Specifically though it was wonderful to experience a beautiful but very different landscape to what I’m used to, very challenging terrain sometimes but totally worth it to explore a new place. On top of that, the incredibly welcoming people, delicious food, and our guide (Ash Carruthers) showing us some amazing local culture that I would not have found out about otherwise. 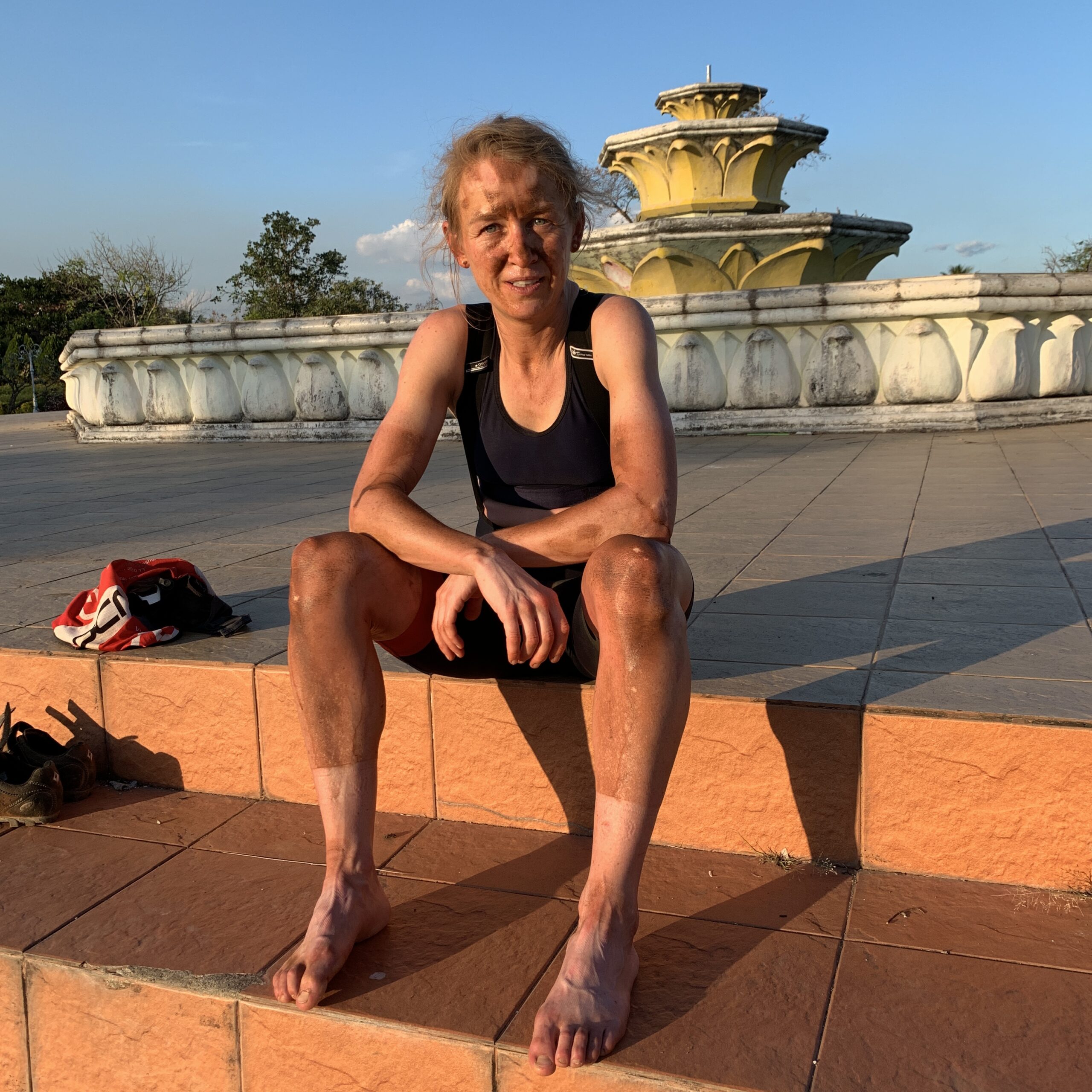 Emma on her Vietnam – Laos – Vietnam epic ride after a day she describes as one of the hardest of her life!

When you do make that trip, of course we’ll hopefully see you on the start line for a Vietnam Trail Series Race. What race distance do you think you’ll choose and why?

So much choice of awesome scenery and distances! I recently ran my first 100km (at UTMR) and it was so much fun, I’d love to do it again. Realistically though it would depend on the time of year and whether I’ve had time to build up the endurance to cope with that distance. 55km or 70km is probably more realistic, and I’ve heard that the VMM Nam Cang is along a ridgeline at 2300m and that sounds like an incredible experience, so maybe the 52km there is what I’d choose.

You’re a self confessed coffee addict. When you were here you enjoyed it a lot – how did you take your Vietnamese coffee (iced, with condensed milk)? Do you see a link between caffeine and (your) performance?

I confess that I did love the condensed milk in hot Vietnamese coffee – usually I don’t take sugar! Back then I didn’t like black coffee, but now I’ve developed a taste for it so when I come back I’d like to try drinking real stuff unadulterated.

In terms of performance: if I don’t have a few cups of coffee and / or tea during the day I do feel a little worse, as I’m so used to drinking it. But I can’t tell if the boost from coffee is thanks to the caffeine or just happiness at how good it tastes!

To read more interviews with runners, see our Q and A archive here.